In what can only be interpreted as a form of collective punishment, the Israeli authorities have instituted a series of road closures out of the city of Hebron.  For the last several days, 4 of the 6 exits out of the city have been closed.  Given that the 2 open exits change on a frequent basis, drivers are left guessing as to which ones are open, creating a whole lot of frustration and inconvenience for all travellers – small minibus service taxis, private cars, and industrial traffic. Reporting of such inconveniences has previously been done by the radio station that was raided last week, leaving no reliable source of such information.

This past Thursday, we were attempting to go to Susiya in the South Hebron Hills.  We took the usual way out of town, only to find ourselves in a traffic jam and learn that the road was closed by a gate.  We drove around to the second nearest road, only to find the same story there.  Finally, we tried the third road and were relieved to find it open.  All of this meant a delay of well over an hour.

A locked gate, blocking traffic in both directions on one of the main roads south from Hebron.

On Friday, I was expecting a friend to visit from Bethlehem, located about 20 miles north of Hebron.   Given the road closures, it was uncertain as to whether or not the service taxis would be running, and whether or not she would be able to come.  Unsure of what to tell her, we took a drive around town.  The primary entrance from the north was closed with dirt mounds, the first time this has happened since 2007 (when it remained closed for a year).  Fortunately, another entrance was open and she was able to come. 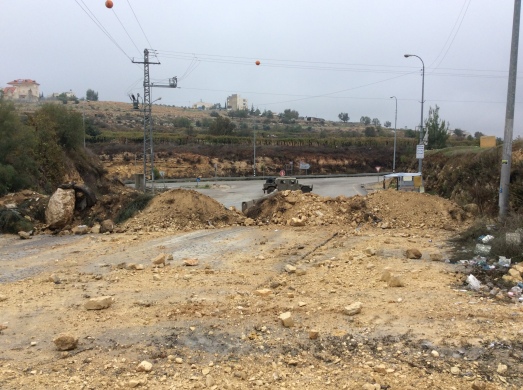 The main road out of Hebron to the north, blocked by earth mounds.

On Saturday, it was more of the same.  The Bethlehem friend needed to get to Jerusalem, and a friend from Jerusalem was coming to Hebron.  Again, more uncertainty as to how all this would happen. Extra phone calls, extra planning, extra concern.  In the end, both got to their destinations.

Our travels on Sunday and today were also marred by road closures in and out of Hebron.  The one road that was open to the south on Sunday was closed today, with the army installing concrete barriers.  It was previously closed from 2000-2010 with similar concrete barriers.  One road to the north now has concrete barriers across it as well.  As we returned to Hebron today, the one open road to the south was interrupted by a flying checkpoint – essentially soldiers stopping vehicles traveling in and out of the city, creating more disruption and harassment.

This yellow truck was being checked by soldiers at a flying checkpoint on the open southern road in and out of Hebron . The driver stood at the rear of the vehicle while soldiers searched through the contents of his truck. No doubt his identification was checked as well.

This was what it was like for the rest of us, as traffic was backed up in both directions at the flying checkpoint into and out of Hebron today.

There has been violence in Hebron in recent weeks, most of it happening in the area of the Old City, with a few incidents on the roads to and from the city.   As the army enacts these types of road restrictions,  it is the collective population that suffers.  Innocent individuals just trying to go about their daily lives, getting to and from school, jobs, etc.  That’s why it’s called collective punishment,