The increasing violence across the West Bank and Jerusalem is worrisome.  To give the UN perspective on the situation, here is an excerpt from yesterday’s UNOCHA Weekly Protection of Civilians Report, 27 October – 2 November, 2015.

Much of the violence over the last few weeks has been in the Hebron area, with the majority of it focused in the fully Israeli controlled H2 (Old City). The middle of the month onward has been particularly violent.  5 Palestinians were  killed by Israeli gunfire in one day (Oct 17) in a series of unrelated incidents, there was 1 death on Oct 21 (tear gas inhalation), and 6 more Palestinians were shot to death in unrelated incidents between Oct 25 -29.  The tear gas victim was 54 years old, while the gunshot victims were all young (15-23 years old).  Two were female, the remainder were male.  One of the gunshot deaths was at the hands of an Israeli settler (many settlers are heavily armed) and the remainder were killed by Israeli soldiers. During these incidents, 2 Israeli’s sustained minor injuries.  All of the injured Palestinians were denied medical assistance by the Israeli soldiers and were left to die where they had fallen.  Circumstances surrounding these deaths are disputed.  The Israeli’s claim that all victims were attempting to stab an Israeli, while Palestinians  argue that many of the victims were unarmed and allege that soldiers have planted knives beside the bodies of the deceased.

International law requires the use of proportionate force.  In an October 22 briefing to the UN Security Council addressing the topic of the increased violence, UN Deputy Secretary General said that “a number of incidents, many caught on video and widely disseminated, call into question the degree of response, including the apparent disproportionate use of lethal force as a first resort.” (www.un.org)

Amnesty International addressed the apparent disproportionate use of violence by the Israeli’s in an Oct 27 report  entitled “Israeli forces in Occupied Palestinian Territories must end pattern of unlawful killings” found on the Amnesty website http://www.amnesty.org.

“Israeli forces and civilians have faced genuine attacks and threats to their lives over the past weeks. But heavily armed soldiers and police wearing body armour facing a possible knife attack have a duty to use proportionate and graduated force and attempt to arrest suspects before resorting to the use of lethal force,” (Philip Luther, Amnesty International)

“There is mounting evidence that, as tensions have risen dramatically, in some cases Israeli forces appear to have ripped up the rulebook and resorted to extreme and unlawful measures. They seem increasingly prone to using lethal force against anyone they perceive as posing a threat, without ensuring that the threat is real.” (Philip Luther, Amnesty International)

“Intentional lethal force should only be used when absolutely necessary to protect life. Instead we are increasingly seeing Israeli forces recklessly flouting international standards by shooting to kill in situations where it is completely unjustified. Israeli forces must end this pattern of unlawful killings and bring all those responsible to justice.” (Philip Luther, Amnesty International)

“Unfortunately, Israel’s investigation systems have long served to perpetuate impunity for unlawful killings of Palestinians by Israeli military and police forces. While we urge the Israeli authorities to conduct independent, impartial investigations into all these incidents, wilful killings of Palestinians in the Occupied Palestinian Territories are grave breaches of the Fourth Geneva Convention, over which all states can exercise universal jurisdiction.”  (Philip Luther, Amnesty International)

In response to this violence, the Israeli’s have “increased security” in the area by increasing the number of checkpoints in H2 and by limiting access of young Palestinian males aged 15-25 through certain checkpoints.  They have also declared the Al Shuhada Street and the Tel Rumeida neighbourhood of H2 a closed military zone, preventing non Palestinian residents from entering the area. These actions have many ramifications. International volunteers can no longer enter to accompany school children to school, something they have done for many years to protect the children from violent settlers.  There is now genuine concern for the safety of these students.  In addition, the community is grieving the loss of many loved ones, and levels of fear and tension are understandably high.  A young Palestinian man living in H2 told me this week that people in the area are afraid to leave their homes even to get food, and many are terrified to go through the checkpoints.

Of course, the violence does not stop with the killings. At a meeting on Wednesday of educational stakeholders, we heard that over 700 students in the area have recently been exposed to tear gas, and over 50 students have been arrested on their way to school. Many students and teachers have endured long delays at the checkpoints, and many are experiencing fear at passing through the checkpoints.  In addition, there were allegations of male soldiers performing inappropriate searches on female students, leading a number of parents to keep their children at home.  There were also reports of skunk water being used on Palestinian neighbourhoods, and concerns raised about the violence of one notorious settler who appears to act with complete impunity, physically attacking both Palestinians and internationals.

This week, we attended a meeting at the Mohammed Ali Mohtaseb Hospital, the only hospital in the H2 area.  As such, they receive the vast majority of emergency cases from the H2 area.  Other Hebron hospitals are located in H1, requiring a trip through at least one checkpoint and possibly multiple checkpoints.  When time is of the essence, one cannot risk a lengthy delay while soldiers decide whether or not to allow the victim through each checkpoint.  The H2 hospital officials reported a huge recent spike in tear gas inhalation admissions.  One day last week, they received 70 students over the course of 1 hour from a girls school, all suffering from tear gas inhalation.  Supplies are running low and with inadequate funding, they are seeking funds to replenish supplies.  HIRN promised to work towards helping them access emergency response funding.  We are also working to supply gas masks to the most severely affected areas. 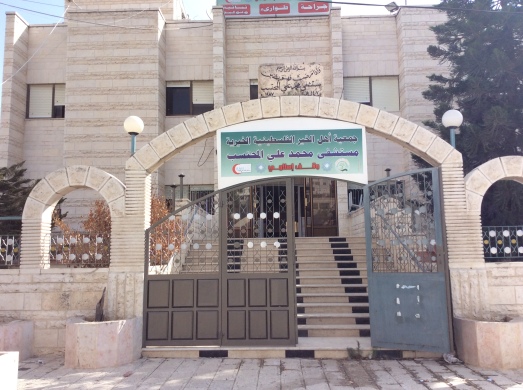 The Mohammed Ali Mohtaseb Hospital, the only hospital in H2 (the Old City of Hebron).

The hospital’s 2 bed emergency room, stretched beyond capacity in recent days with emergency admissions of primarily tear gas inhalation victims, many of whom are young children.