Last week I wrote about my young friend living in a rural village whose home was at risk of demolition.  I deliberately did not include her name or the location of her village so as not to jeopardize the slim hope they held that this demolition could be avoided.

Yesterday, the villagers received word from their lawyers that they had exhausted all legal means to save the 4  homes in the village that were at greatest risk. The only option open to them was to submit a fee of 1000 NIS per house (approximately $350 $Cdn) before Thursday of this week to apply for mercy from a judge.  The villagers were unable to pay the fee.  Today, we were thinking about how we could help them raise this money when we received word that the Israeli military and bulldozers had arrived in their South Hebron Hills village of Um al Kher.  By the time they left, 5 homes were demolished, as well as the taboun oven,  a community bread making oven shared by a number of women in the village to bake their daily bread.  Bread is a staple of the traditional Palestinian diet.  The issue of the taboun oven is currently before the courts. As such, there was no demolition order on the oven. Nonetheless, it was demolished today.

Upon speaking with my young friend, she told me that I was free to use her picture and name in the sharing of this story.

Her name is Iman. 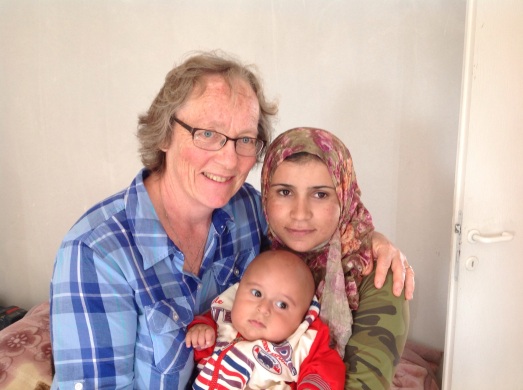 Iman, her young baby Mohammed, and myself. This picture was taken in her living room, on my visit to the village prior to the threat of imminent demolition.

In spite of our age difference (she is younger than my daughters), we share a precious and abiding friendship that began 3 years ago when I was with the South Hebron Hills EAPPI team.  She is gentle natured, kind hearted, articulate with excellent English, and carries a wisdom beyond her years. Today, the Israeli forces demolished the home she has shared with her husband Balil and their 5 month old son Mohammed.

Here are some photos of their house.  It was a fairly simple 4 room house.  A living room, bedroom, small bathroom and small kitchen. But it was more than that.  It was their home. 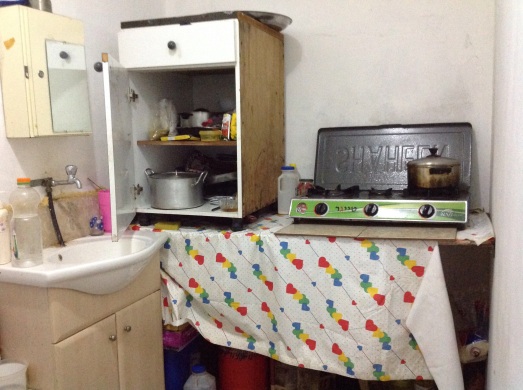 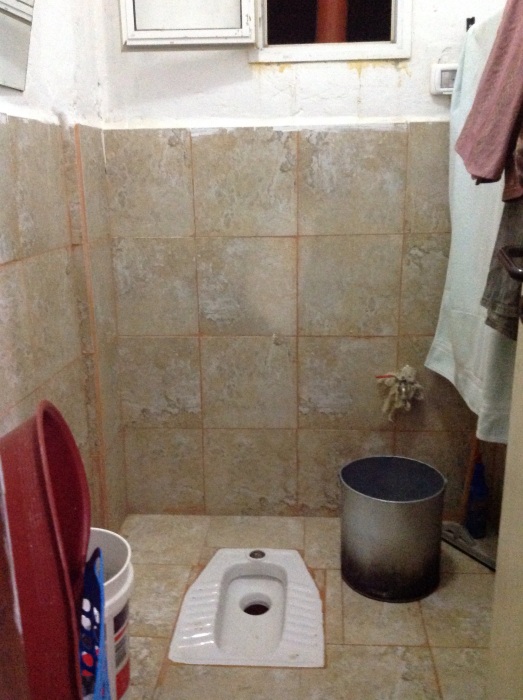 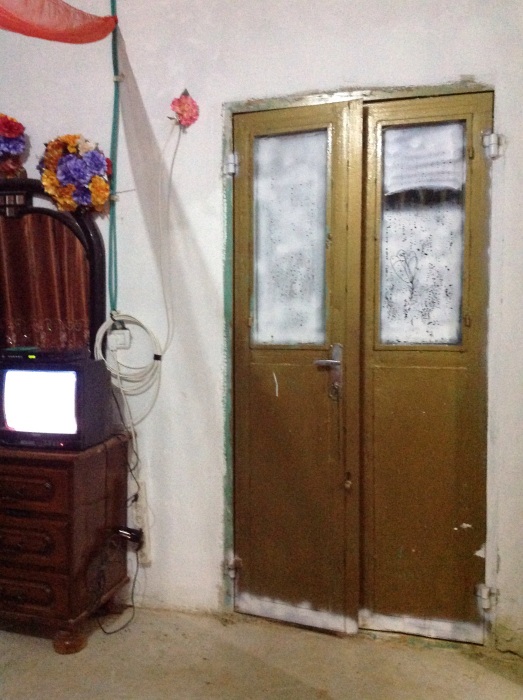 The doors to the home. 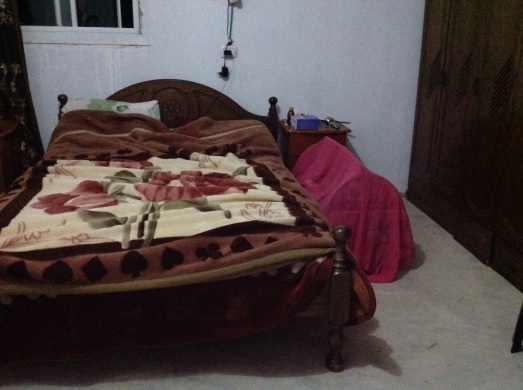 The  bedroom in their home, with baby Mohammed sleeping in his cradle beside the bed. 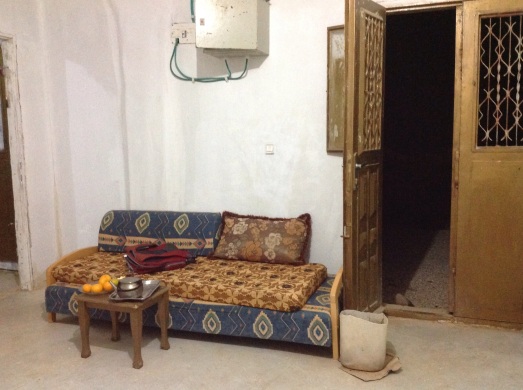 The living room where we visited. Notice the oranges on the table. This picture was taken the day they learned that the house was at risk of imminent demolition. In spite of the stress associated with that, she insisted on sending me home that night with a bag of oranges that Balil had brought home from the farm he works on.

Today, all that is left of their home is a pile of rubble. 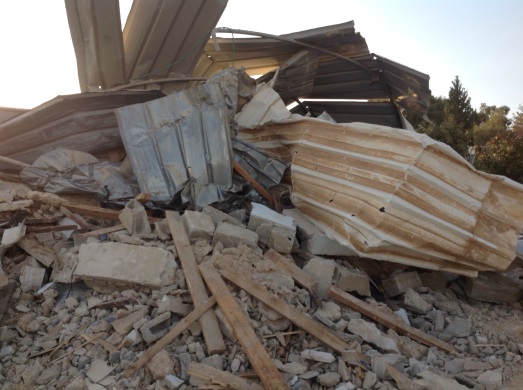 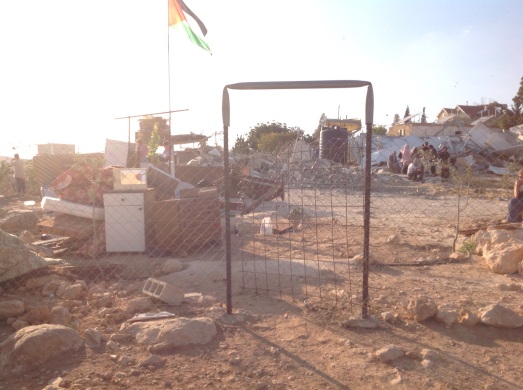 The gate to Iman and Balil’s home, with the rubble in the background. 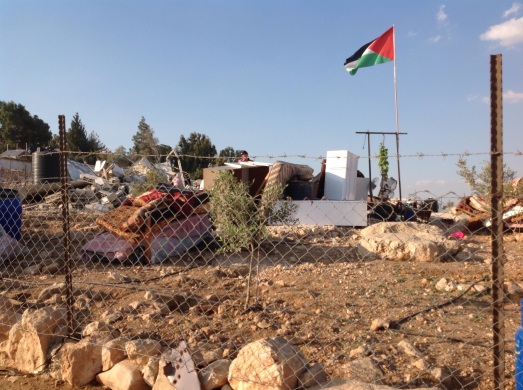 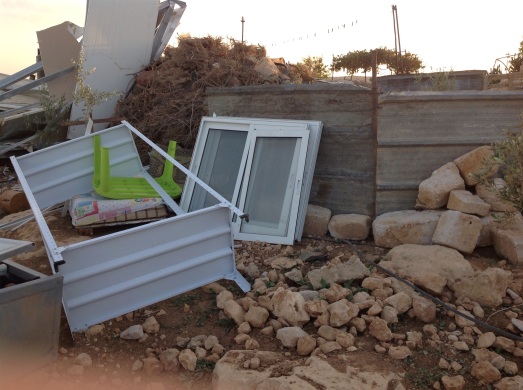 The windows from the house that Iman was able to salvage prior to the demolition.

Iman said that when the bulldozers arrived, she started to get their belongings out of the house.  Balil was away at work.  The bulldozers demolished some of the other homes before coming to hers. When they arrived at her house, the soldiers laughed at her as she stood inside.  Then one of them yelled at her to “Shut up and get out.”  When she was outside, the demolition started.  Unable to watch, she cried as their home was destroyed.

Very shaken, she spoke of her concern that winter is coming and they do not have a home.  Winter here is cool, windy, and damp.  The ICRC provide small tents for families whose homes have been demolished. How could they live in a tent in those conditions with a baby?

Of more immediate concern was where they would sleep tonight.  There were 5 families left homeless by these demolitions today.  All would need shelter.

Of further concern was the loss of the taboun oven.  It has served as an integral part of the village for many, many years. It is the oven that Iman and several other village women have used on a daily basis to bake their bread. 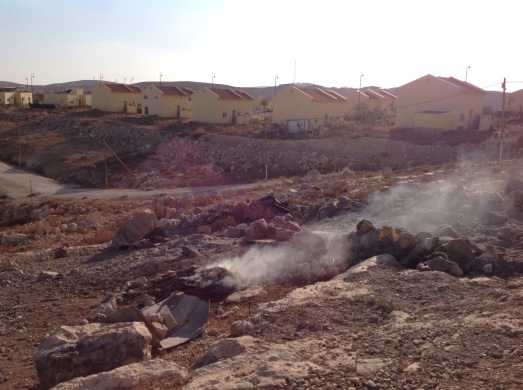 The remains of the demolished taboun oven, with the nearby settlement homes in the background. In what can only be described as a further act of cruelty and harassment,  the settlers are suing the villagers for smoke inhalation due to the oven, asking for a 500,000NIS ($165,000 Cdn) settlement.

Prior to the army’s declaration of the village as a closed military zone during the demolitions, 3 volunteers from the Italian peace organization Operation Dove arrived in the village.  Operation Dove are a well respected peace group in the South Hebron Hills and do excellent work observing, monitoring and documenting human rights abuses, as well as providing non violent protective presence.  Today, one of the 3 Operation Dove members who went to the Um al Kher demolitions was arrested in the village.  We were told that he is currently being deported from the country.

It was a deeply painful day today in Um al Kher.

Tonight, I have no words to express the suffering in the village.  But I do know, beyond any shadow of any doubt, that demolishing Iman and Balil’s home will not further the security of the State of Israel in any possible way.  This is an absolute act of willful cruelty.  As an occupying power, Israel has the legal obligation under International Law to provide for the well being of the occupied people.  Demolishing people’s homes does not provide for their well being.

Canada’s Prime Minister Stephen Harper has repeatedly stated that Canada is Israel’s best friend.  I do not believe that Canadians support actions that dehumanize and inflict needless suffering on innocent individuals and families.  I do not believe that Canadians support the actions of foreign governments that so blatantly contravene International Law.  It is time that our elected representatives actually represent the values of the Canadian people on the world stage and hold nations states accountable for their actions.

Tonight, let us pray for the those who have been hurt by this act of violence.

Tonight, let us pray for peace.