We had planned yesterday to visit one of the villages we have not yet been to, but when our driver arrived to take us there he told us that there had been an “incident” the night before in one of the other villages.   We made some inquiries and learned that olive trees in the village of Khirbet Shuweika, located southwest of Yatta, had been destroyed by settlers.  We decided to change our plans and go there immediately.  Part of our role here is to document settler incursions of villages  so that this information can be shared with human rights organizations.  Another part of our role here is to provide an accompanying presence to those in need.

As we drove along the bumpy dirt road to get there, we met Israeli army and Israeli police leaving the village, and a car full of villagers who stopped to tell us they were enroute to Hebron to report the incident to the police there.  Apparently, for these villagers living in the Israeli controlled Area C of the West Bank, it is not enough to report a crime and have the appropriate authorities come to see the crime….you have to drive 2 hours or more to officially report it.  It is understood by these villagers that in all likelihood there will be no charges laid, no repercussions to the perpetrators of the crime, but still….it feels necessary to report the crime.

When we arrived at the village, we could see that representatives from the  news media, the UN, and  B’Tselem (the Israeli Information Center for Human Rights in the Occupied Territories –  see http://www.btselem.org)   were already there.  We talked with them briefly, and then  walked downhill to the grove.  There we found the first of the destroyed olive trees, broken over, branches ripped off, olives and branches laying on the ground.   I felt physically ill as I looked at the scene.  Why would anyone do this?  Why would anyone wantonly destroy these olive trees?   Why?  Why?  Why???? 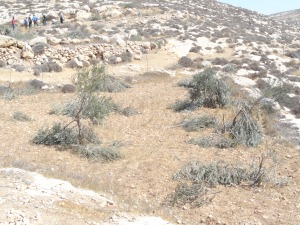 I approached the farmer who had found this destruction only hours before.  Through my broken Arabic,  I attempted to convey to him my sorrow.  He looked at my face and understood.   Nodding, he motioned his agreement. Then he said “Come”.  I followed him down the hill, to more damage, more destruction.  Silently we walked from destroyed tree to destroyed tree, surveying the damage,  reverently touching the branches that lay on the ground.  He picked some of the olives….olives that in one month’s time would be ready for harvest, but now are worthless, and handed them to me.

immature olives, 1 month pre-harvest....olives that were lost in yesterday's destruction

“Come” he said again, and we walked further down the hill.  As we did so,  we crossed the barbed wire fence that separated the sections of the grove.  He very carefully held the wire down to the ground,  intent on keeping me from injury.  More broken trees.  More loss.  Again, I conveyed my sense of shock, of disbelief, of horror. Again he nodded, understanding my emotion.   His eyes showed such deep despair, such sorrow, and such grief.

Salami standing beside one of 46 destroyed olive trees

Again, he said “Come” and so we climbed  back up the hill.  He turned to me as we climbed and gently took hold of my arm, wanting to ensure my safety as we climbed up the steep and unsteady bank.  We walked over to a message that the perpetrators of this terrible crime had spray painted in Hebrew on the rocks on the hillside.  It was clear that neither of us could interpret the words written there, but each of us felt the hatred that had motivated this terrible act, and each of us felt the horror of it.

I learned from him that 46 olive trees in total had been destroyed that day.  They were 12 year old trees, only a month away from harvest.  Had they been left to mature, these olives would have been pressed into oil.  The trees themselves would have been productive for hundreds of years to come.  Later, the school teacher and a classroom full of students arrived to see the damage.  The teacher explained that these trees were 46 of their total of 200 trees.

As we left, we wondered to ourselves what the cost of this loss would be.  Beyond this year’s lost harvest,  how do you calculate the lost economic potential of hundreds of years of growth and production?   How do you calculate both the economic and the human cost of raising these trees to the point they were at?   And how do you begin to count the human impact of this loss,  the emotional toll that such a violent invasion to one’s life work and livelihood brings?

Later, we learned that the translation of the  message spray painted on the rocks said that this was done in retribution for a stone throwing incident near Hebron earlier this week.  An incident that these villagers were not a part of and very likely knew nothing about.  But an incident that they will pay dearly for over the months and years to come.